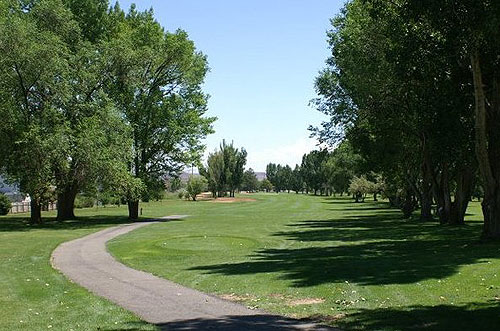 Roosevelt's golf course sits on 150 acres of land overlooking the city of Roosevelt and offers panoramic views of the community, surrounding area, and the Uinta Mountains to the north. The Uintas are the highest range in Utah with King's Peak rising to 13,600 ft, which is the highest point in Utah.

The front nine holes of the course was opened in May of 1974 and was designed by the late Joe Williams. The front nine is very traditional with tree lined fairways and large greens. The trees increase the difficulty and make this nine a good test to even the advanced golfer. Water comes into play on three holes on this side. The greens on the front are not very severe but do have many subtle breaks.

The back nine was opened in May on 1994 and was designed by local motel owner Gordie Harmston and was built by a committee of local enthusiasts with a grant from the State of Utah and much donated time and money. The back nine plays more like a links course until the trees mature. The back nine features an island green, a par three with a vertical drop of over a 100 ft., and a par five with a double fairway. A large cliff area comes into play on three of the holes and the views are magnificent. The greens on the back are more severe than the front and offer a real putting test. The course offers wall to wall grass on all the holes except two. This is a very lush course and gives one the sense of an old country club.

The two nines total over 7000 yards from the back tees but offer four sets of tees on most holes so anyone can enjoy this layout. Carts are available, but the course can easily be walked. You could stay in a motel and play golf continuously for a week for what it would cost for two days at a golf resort.